Launching of the Alliance 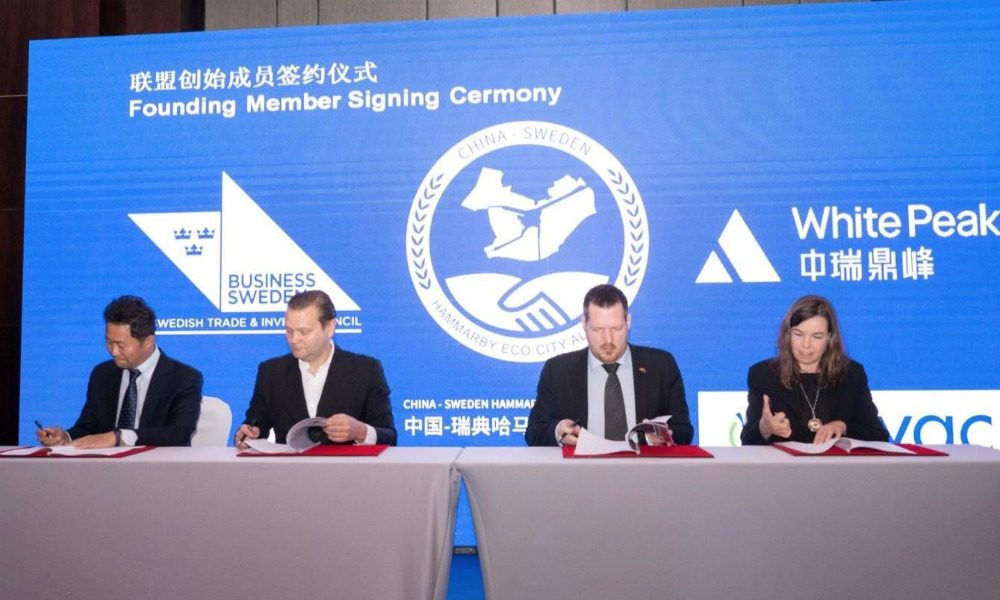 The alliance, which was launched at a time when China has achieving green and sustainable development as a top national priority, will bring Swedish solutions to the development of Yantai Hammarby Eco City, a unique Swedish-style community based on Stockholm’s Hammarby Sjöstad, one of the world’s best eco city examples.

Founding members of the alliance wish the Yantai Hammarby Eco City would become a pilot smart-city project nationwide through which Swedish expertise and ideas will be shared to contribute to the whole of China.

The alliance’s four founding members include Business Sweden – the Swedish Trade and Invest Council, White Peak, the largest European residential developer in China, Sweco International AB, an engineering consultancy headquartered in Stockholm, and Envac AB, one of the most innovative players in the global waste collection industry.

Sweden’s Trade Commissioner China David Hallgren said the formation of the alliance is “one of the most important steps to enhance the introduction of Swedish companies and technologies to Chinese cities”.

“Sweden has been a pioneer on environmental policy making and natural resource protection. Thanks to technologies developed towards a smarter and more sustainable urban living, Sweden has made great achievements on building sustainable cities,” Hallgren said.

“We are ready to share experience of environmental protection and sustainable living with Chinese cities and support the sustainable development for China’s urbanization,” Hallgren said in his remarks to the launching ceremony, which is followed by Innovation Empowered Sustainable Eco City Forum.

Jesper Jos Olsson, Group CEO and Founding Partner of White Peak, said the Yantai project, “a signature smart eco-city”, will be an “incorporation of advanced environmental technology, community management and planning philosophy from Sweden together with the digital innovations from China”.

Olsson announced in March White Peak had begun constructing the project during the Nordic China Smart City Conference 2019 in Stockholm.

He said the Yantai Hammarby Eco City, a 4.6-sq-km large project to house 15,000 “happy eco citizens who trust each other”, will employ advanced digital technology to be a smart and intelligent community.

Sweco International AB is responsible for the planning and design of the Yantai Hammarby Eco City. The initial phase, including two land parcels White Peak acquired in December 2018, will be developed into around 2000 homes, an ice hockey arena, as well as office and retail facilities.

She wished the project would become “a catalyst for change” to prompt the whole city of Yantai to go more sustainable.

Envac AB, also inventor of the pneumatic waste collection system, will provide the project waste management solution, which is the same as that of Hammarby Sjöstad.

Sitting in the southeastern part of Stockholm, Hammarby Sjöstad was in the 1990s known as a rundown industrial and residential area. After years of re-development, it is now one of Stockholm’s most pleasant residential districts and one of the world’s most successful urban renewal districts.

Xi Jinping, then vice-president of China, visited the district in 2010. Xi again called for both countries to strengthen cooperation in smart city development in 2017 during his meeting with Swedish Prime Minister Stefan Löfven.

Törnblom, who has been involved in the development of Hammarby Sjöstad since its beginning around year 2000, shared some of the area’s key environmental features, including:

“Hammarby Sjöstad has been the inspiration to hundred thousand politicians, planners, architects and developers from all over the world. The Yantai project has the chance to make a similar impression on China and the world,” Törnblom said. “The Swedish side is committed to make this a success in close cooperation with the Yantai government and local companies.”