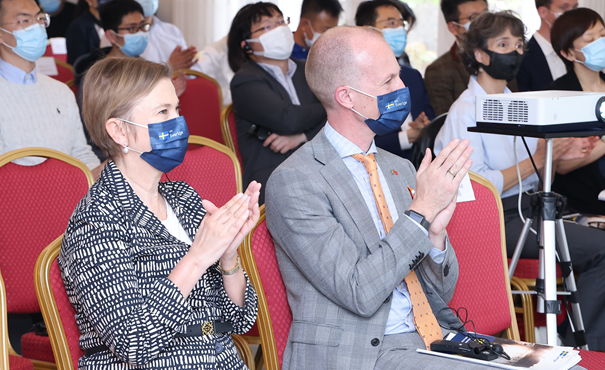 Regarding China’s ambitious carbon neutrality goal, the White Paper begins by discussing in detail Sweden’s experience and models in sustainable urban development and introduces achievements in relevant China-Sweden cooperation. As stated in the White Paper, Swedish companies in the field of sustainable urban development “stand ready to contribute to China’s grand carbon neutrality plan and pledge continuous support for Chinese developers and governments in developing cities in a sustainable manner”.

Carbon neutrality is the consensus of all countries in the world. How to reduce urban carbon emissions amid increasing urbanization is something that must be considered by governments and enterprises. The White Paper was built under this background, aiming to demonstrate the ways to achieve our goals through innovations, technologies, and visions, and by maximizing the cooperation among enterprises and between enterprises and governments.

The White Paper was launched at the Swedish Embassy in China. “There is still more work to be done to reach carbon neutrality, and international collaboration will remain key to sharing best practices and spreading successful innovations.,” said H.E. Helena Sångeland, Swedish Ambassador to China. “The Hammarby Eco City Alliance in China is one example of Swedish innovation. The alliance´s white paper gives concrete examples of how Swedish solutions in sustainable urban development work can be implemented in China.”

Representatives from the Alliance discussed how they are bringing the vision of sustainable urban development into reality. “When people think about carbon emission the first sector comes up may be energy or manufacture. However, it is critical to point out that construction and property sector, along with up and down stream sectors generates massive amount of carbon emission. As construction and property sectors are inseparable parts of cities, like many countries China will have to decrease carbon emissions in these two sectors to achieve its carbon neutrality goal as urbanization rate continues to grow,” said White Peak Group CEO and Founding Partner Jesper Jos Olsson.

White Peak and Qingdao Metro Real Estate Limited signed an agreement in bringing the Hammarby model to Qingdao city. Both parties agree to comprehensively partner on landing Swedish and Nordic sustainable development strategies in Qingdao and more Chinese cities and building Hammarby sustainable demonstration zones. As part of the first phase of the agreement signed in 2021, White Peak and Qingdao Metro Real Estate Limited planned to acquire land and initiate construction within 2022 for the first site with planned construction area totaling one million square meters.

Since 2019, the Alliance has officially introduced the Hammarby model to China. The first Eco City project has redeveloped a former industrial area located in Yantai Zhuji into a green, innovative, and digital eco community. The project, with 220,000 square meters of properties, is about to be completed. It includes around 2,000 homes, an ice hockey arena, as well as apartment and retail facilities. Developed with Hammarby model and concept, the Eco City introduced Swedish solutions including the vacuum waste collection system, sponge city and roof top photovoltaics, and has become a featured sustainable living community in Yantai city. The Eco City has already obtained the “Very Good” rating from BREEAM, the world’s longest established method of benchmark rating for buildings’ sustainability.

“Hammarby Sjostad had provided a pioneering sample for Sweden’s sustainable urban development, and we are more than happy to see such successful experience could bring value to China,” said White Peak Group Jesper Jos Olsson.

Green and sustainable urban environment not only helps to improve living quality of residents, but also supports in achieving the goal of carbon neutrality. We look forward to witnessing more innovative sustainable solutions from Sweden to be applied and alleviate the carbon emission problem.

Click here for full version of the white paper